You Are Here: Days of a Domestic Dad » Daisy Ridley is the New Luke Skywalker – Star Wars: The Force Awakens
December 14, 2015

With the Star Wars Saga closely approaching, the thing on fans minds are where is Luke Skywalker? I wondered myself after watching a few of Star Wars: The Force Awakens trailers. From what I could tell, Luke was no where to be found. I convinced myself that Kylo Ren is Luke Skywalker! But he is not. On the other hand I do have the opinion that Rey played by Daisy Ridley is the new Luke Skywalker. 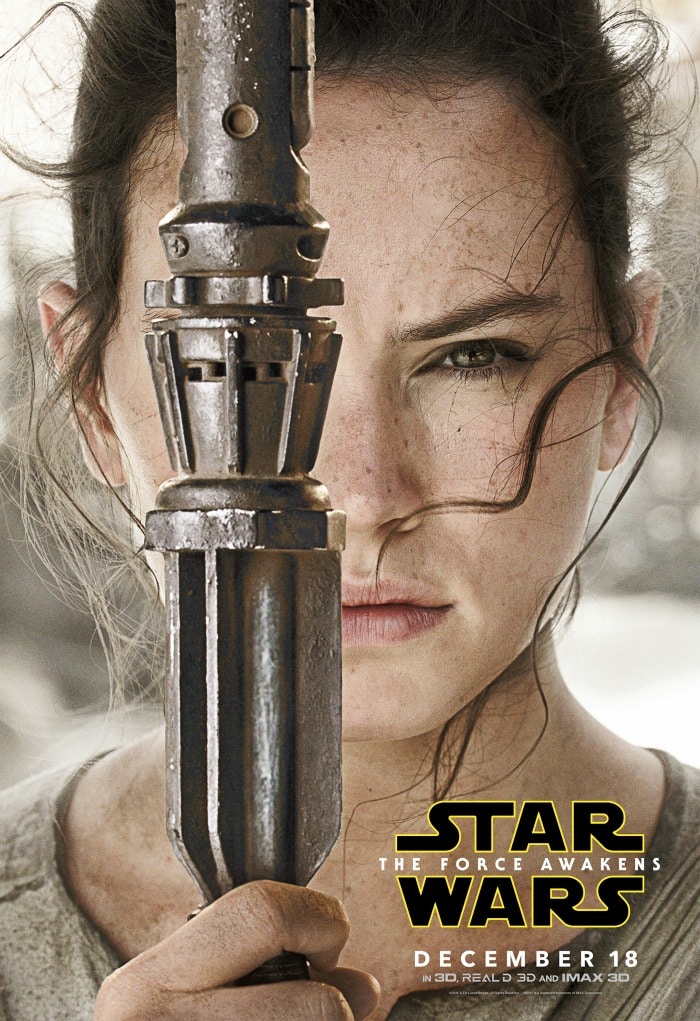 For me, Luke Skywalker (Mark Hamhill) was the super hero of the 70’s, I mean he nearly brought down the Empire by him self. Just kidding. But I will say, after our interview with Daisy Ridley at the Global Press Event for Star Wars: The Force Awakens I would say Rey is the new Luke. 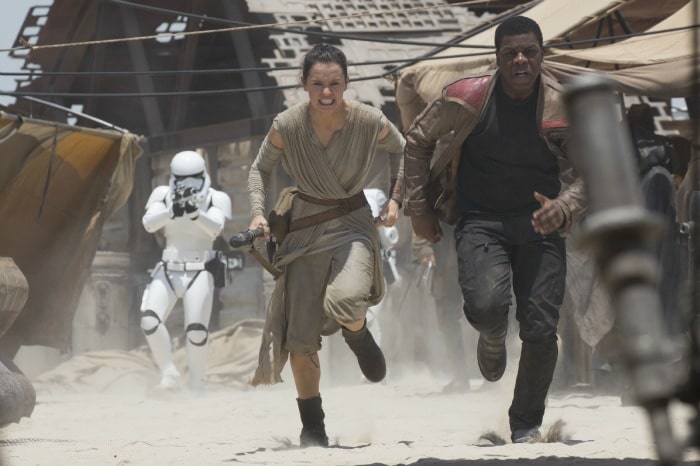 Rey is going to be a out of the world addition to the Star Wars Saga, and is going to help raise up tons of new Star Wars Fans! One of the few questions asked to Daisy Ridley was:

Q: So you play a very strong female lead in the movie.  So do you have a good takeaway for young girls?

Daisy: Yeah. I think I’ve been very lucky in my life to be able to look up to incredible women. Me and my mom have an amazing relationship and she is really an amazing woman. And my Gram, my mom has a group of friends who we kind of grew up with. I don’t really have very much close family so they formed ours. I remember when I was auditioning, I met Kathy and I didn’t really understand who she was at that point. That’s obviously embarrassing now. But, she asked me who I looked up to and I remember talking about them and now I look at Kathy and think, oh my god. She’s another person. She’s another woman I look up to. So it’s funny because the women I look up to are older.

They’re wiser. They have far more life experience. But Rey, in her way, has lived a life and she has wisdom probably beyond her years. And the thought of girls being able to relate to a character in a film where perhaps girls can’t find in films so much of what they can physically like see themselves in. They can’t follow a story sometimes if there’s nothing that’s representing them in the film. So to be part of that is incredible.

I’m just an actress. I’m not changing the world. But, to be part of something that is perhaps groundbreaking and to be part of a movement of women, not just in film, all over the world and all different sectors. That is an incredible thing. 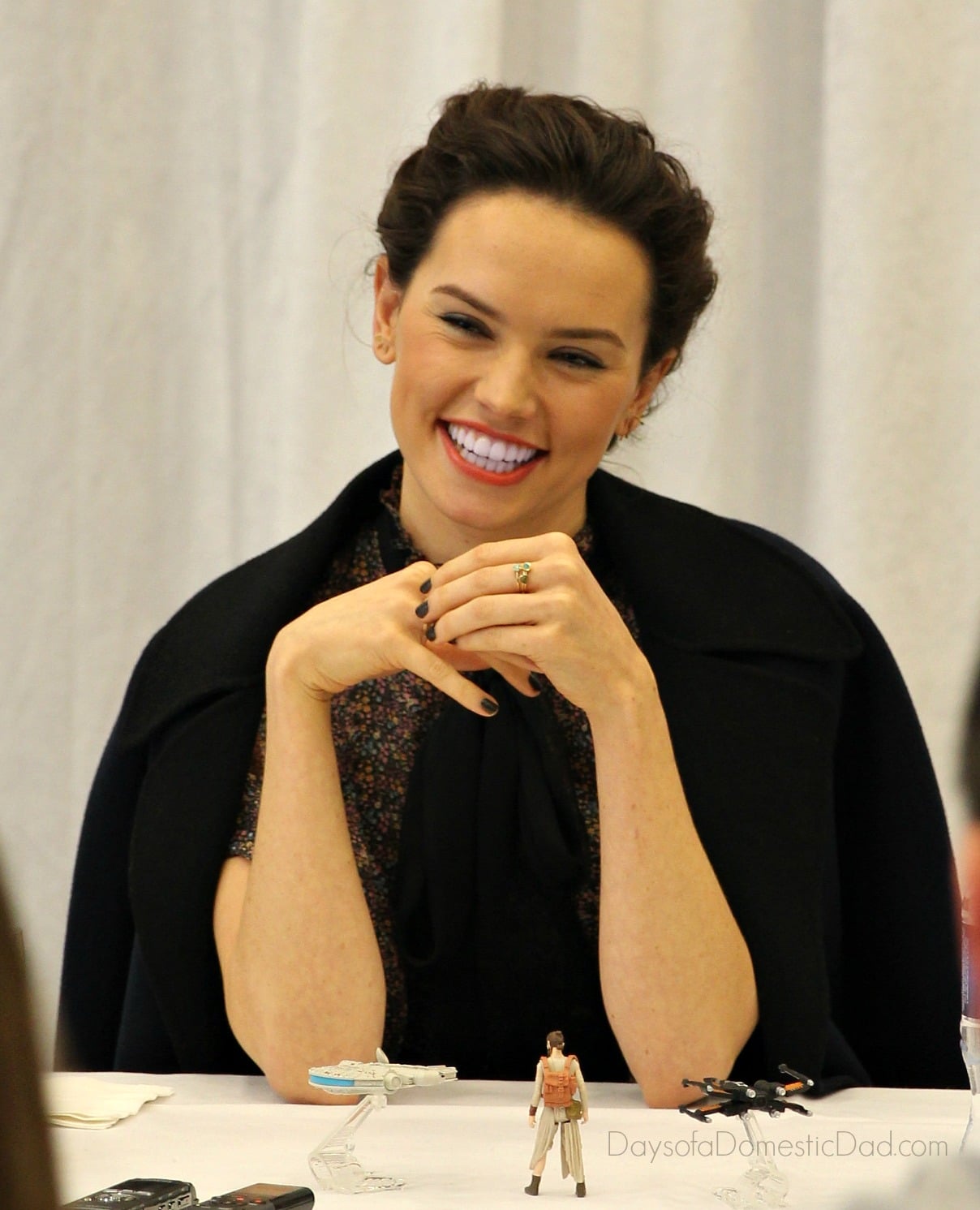 With her saying that, I look forward to seeing her character from start to finish. I know my girls are going to love seeing Rey on the big screen.

Q :    What characteristics of Rey do you see in yourself?

Daisy Ridley : Obviously I see a lot of myself in her because it’s me playing her. I think she and I are quite like myself as a person. I think everyone can be hard on themselves but I think all too often people are far too hard on themselves and it’s not celebrated enough that people can actually enjoy themselves. But all of the qualities I think maybe I possess in small things, I think Rey has in greater amounts.

So I like to think I’m kind of brave — but she’s far braver. I like to think I try and do the right thing — but she far exceeds that. So I think she’s kind not polished and she’s not nuanced and I think that’s why she’s so brilliant and so relatable.  But she’s far more of anything I think I could ever be. I guess because of her circumstances and the fact that she’s not real [she’s] brave, honest, and open.

I hate lying. I’m a very open person and she’s open to everything that’s going around her — even though it scares her, even though, it makes her feel like she wants to run — she kind of plows on. So I hope I have those qualities.

And this was just from a few questions from our interview with Daisy Ridley (Rey), if you would like to read the full interview leave me a comment below. Overall, it was fun to visit with her and I can’t wait to see Rey in Star Wars: The Force Awakens.