You Are Here: Days of a Domestic Dad » JJ Abrams: One of the Who’s Who of Hollywood Behind the Scenes
December 18, 2015

JJ Abrams: One of the Who’s Who of Hollywood Behind the Scenes
Unless you lived under a rock for about 20 years, or you are from an undeveloped country, where you are only familiar with the jungle or forest, you have to be familiar with at least one of JJ Abrams’ movies/TV. JJ Abrams, whose birth name is Jeffrey Jacob Abrams, is an American composer, producer, writer, director, and actor, and he has been doing extraordinary work in these fields for almost 20 years now. He is best known of his brilliant work in the genres of science fiction, drama, and action. Even the most stern critic can’t deny his great works. 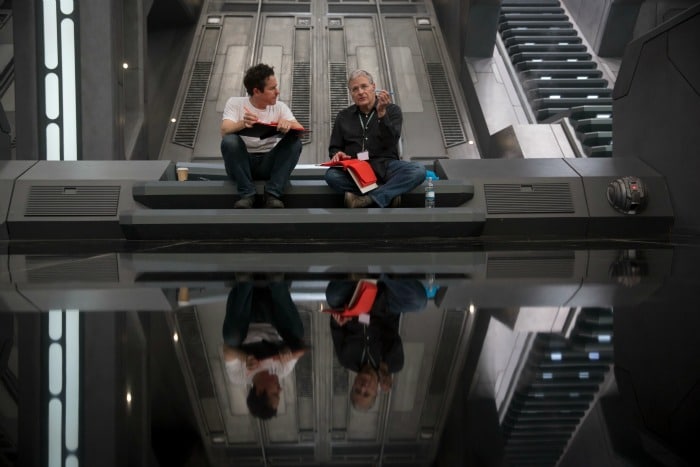 JJ Abrams made a strong debut of his talent on the big screen in 1998, when he teamed up with the director, Michael Bay, and the producer, Jerry Bruckheimer, for the movie called Armageddon. That same year, JJ Abrams started to endeavor into television with Touchstone Television and Imagine Television for the series called Felicity. JJ Abrams was the executive producer and the co-creator of this show, and it ran from 1998 to 2002. He also directed this TV series a few times in the first season, and he co-wrote the theme song. Abrams also wrote/produced other recognizable and extraordinary films, such as Cloverfield, Forever Young, and Regarding Henry. Additionally, he created/co-created a slue of other TV drama series, including Fringe, Lost, and Alias. 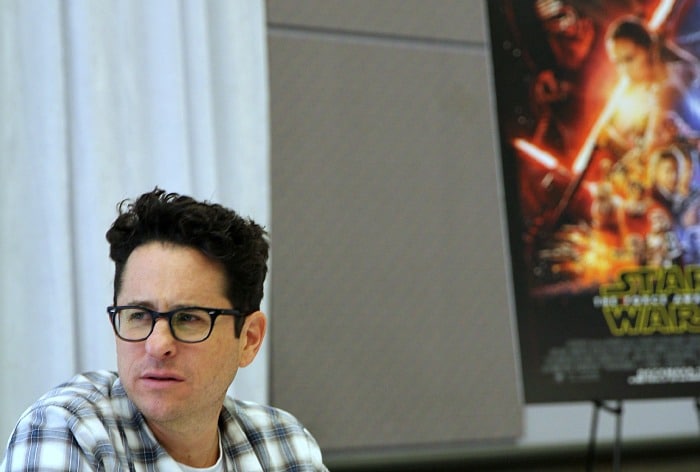 What He’s Up to Now

As of now, Abrams with his impressive resume of movie and television accolades, he is now using his energies and creativity in the creation of his upcoming movie called Star Wars: The Force Awakens. Besides that, he is doing quite well in maintaining his business, Bad Robots Production; his marriage of close to 19+ years with Katie McGrath; and being a great father to their two, young, and adorable children. Abrams, his wife, and their children’s time is divided between Maine and Los Angeles. 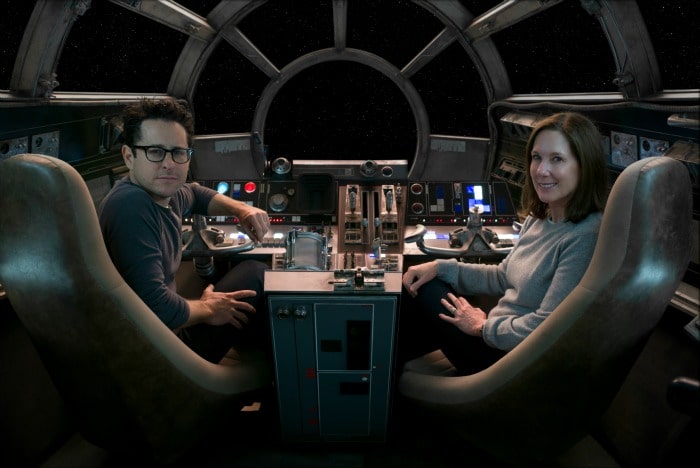 Q: Can you tell us about the beginning of Episode 7, like, you know, who asked you to be involved and what you felt when you were first asked?

Yeah, it was, it was Kathleen Kennedy, who I’ve known for a long time and she called and asked if I was interested in working on Star Wars.  And, of course, you know, it was a very surreal question and it was very flattering.  And my answer was no, partly because, Katie, my wife and I, had plans to take our kids away.  I’d been working on a lot of back-to-back, ah, projects for a while, partly because I’d worked on a number of sequels, and it felt like enough is enough, and partly because I care about Star Wars so much that the idea of taking it on felt, you know, like a kind of a thing that I couldn’t imagine, and intimidating.

And so I said no thank you, and she said can we get together.  I said yes.  And when Kathy Kennedy and you get together, she’ll convince you of whatever it is she wants you to.  And she just, ah, was amazing and basically said this was going to be an opportunity to continue the story, ah, since Return of the Jedi.  And I just, as we were talking, I realized this is 30-some years after the fact, the main characters would have been born 10 to 15 years after that movie. 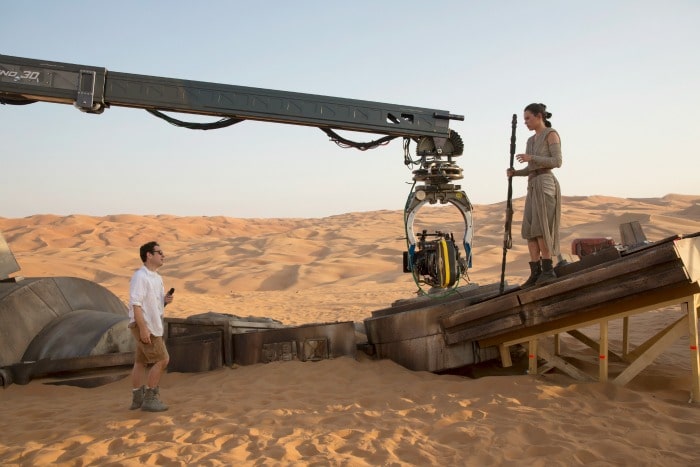 They’d, you know, looking back on what we know, ah, of the story, that would be ancient history for kids who were 19, 20 years old.  Wwhat do they know?  What do they believe?  And what do they believe in?  And the idea of finding these young people who exist in a Star Wars universe was so compelling to me, and that feeling of, of re-discovering a world and a feeling that was so powerful, ah, for growing up, was undeniable.  And I, after the meeting, I went downstairs and, and found Katie, my wife, and I just said I think I really want to do this.

And she said really.  I said yes.  And she said, you know, ah, this is definitely a once in a lifetime opportunity.  And, you know, you really need to consider it, if this is something you want to do.  And I did and it wasn’t an easy for us, for, you know, our family, for, my company, Bad Robot.

There were a lot of issues that came with it and yet, I knew that as challenging as it would be that if we could all get our legs and do it right, that it could be an extraordinary situation and, and an amazing experience, and in every category from, you know, prep and figuring out the story and, ah, and writing the script with Lawrence Kasdan and designing the movie and, and shooting it and editing it and doing post and scoring it.

And, I mean, literally through the 3D, ah, ah, pass, the reviews that we’ve had, and I’m not always the biggest 3D fan, but I will tell you there are things in this movie that I actually felt were shockingly better in 3D, because there are literally shots that I couldn’t believe I saw things in in 3D that I hadn’t seen in 2D.  It was so strange and I, and I, I know this might sound like I’m selling, you know, the 3D, and to anyone who doesn’t really care, see it in 2D.  Don’t see it in 3D, you know.  It’s okay.

I was amazed at how, how great that looked.  I, every, every stage has been, ah, as gratifying as it was challenging, and it’s, it’s all because of the unparalleled and unbelievable work that everyone did at every turn.  And I’m very grateful.  Yes?

Q: I have one about BB-8. I wondered, like everyone’s fallen in love with BB-8 already, and so how did, how did the idea for, how did he come about?  I know you worked Sphero.

Well, Sphero actually came, came later.  What happened was we were working on the story, trying to figure out, we knew we had a droid that was gonna be a critical piece of the puzzle, but we didn’t know if he was going to be sort of bi-pedal, like, you know, C3PO, or roll around like R2D2 or some other thing.  And I just had this idea that if we, if we had a sphere and then a, a semi-sphere on top, you could get quite a bit of expression without a face.

And so I drew a sketch of BB-8, um, and I had the eye and little antenna and everything and, ah, it didn’t have a color pattern and it didn’t have all the critical details that, that Neil and his team brought in, but I sent that to Neil Scandlan and the began to come up with, ah, you know, designs that would, ah, sort of follow that.  And it was amazing how quickly it looked like it could work, and I was, I didn’t know if they would be able to create something that could be performed on camera, which I knew was going to be important.

And they did, and I will never forget the first day that we came to their offices to see BB-8, ah, being performed after we’d,  you know, agreed on design, etcetera and scale and everything.  And he, we, we walked in and Brian, the puppeteer, came out and wheeled out BB-8 on his rig.  And literally within seconds, Brian disappeared, like he was right there, but it was like he wasn’t there and this thing was looking around and like, and curious and, and you could feel the soul because Brian was imbuing him with life.