While is Las Angeles in May, I had the opportunity of attending a press event at DreamWorks Animations to learn about the upcoming Netflix release of Home: Adventures With Tip and Oh. If you and your family have not seen the DreamWorks Animation of Home you are missing out on a really special movie to share with your loved ones. My wife and I took all 5 of our kids to see it and it even had my 20-year-old streaming tears of joy and laughter! Tip and Oh go on an incredible adventure to find “My Mom” in a race against time before the glooming Gorg gets to earth and Boov have to run away again. 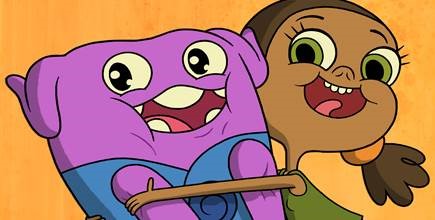 Home Adventures With Tip and Oh

For those of you that have seen this touching tale of two unique people finding their way and learning new things, have experienced the love Tip and Oh share for each other… not to mention all of their hysterical conversations! Well, Netflix and DreamWorks Animation have partnered up to keep that same love and fun story rolling with the new Netflix series Home: Adventures With Tip and Oh!

Taking place only about a month after Home was over, you and your family can join Tip and her BBF (Best Boov Friend) Oh as they embark on the everyday adventure of becoming family. Unlike the movie Home, this new series is in the traditional 2D animation style with new creative textures to give it depth and that funky style.

While the voice actors from Home are not in this new series, there are some extremely talented actors who voice Tip (Rachel Crow) and Oh (Mark Whitten). I seriously had a hard time finding the differences in the voices. Rachel Crow not only voices Tip, but also sings the theme song that will surely be stuck in your head through out the series along with many other originals written and preformed by Rachel.
Each episode is two twelve-minute mini episodes put together, perfect to keep all ages engaged! Although the main audience age would mostly 4-12, I was with a full theater of adults who loved and laughed along with the characters. I encourage you and your family to watch Home: Adventures With Tip and Oh when the full first season is released on Netflix July 29th!

“When Oh, a loveable misfit from another planet, lands on Earth and finds himself on the run from his own people, he forms an unlikely friendship with an adventurous girl named Tip who is on a quest of her own.

Through a series of comic adventures with Tip, Oh comes to understand that being different and making mistakes is all part of being human, and together they discover the true meaning of the word HOME.”