The Joyous Power of the Toyota Tundra Double cab TRD Pro
In recent years, Toyota has made a move toward bold exteriors in many of its trucks and SUVs. Perhaps nowhere is this more notable than its Toyota Tundra Double Cab TRD Pro, with its oversized grill and black bezel headlights. While the body is certainly an appealing asset, Toyota has much more to offer in its Tundra models, none of which should be overlooked when driving said truck.

While the aforementioned features (grill and headlights) are certainly the first to be noticed, alongside the TRD Pro bed stamp, the 18-inch black alloy wheels are just as notable. Wrapped in 32-in. Michelin LTX AT2 tires, the wheels of the truck let drivers and pedestrians alike learn for themselves that this truck is made for power. It’s a vehicle that absolutely dominates off-road terrain, built with a 5.7 liter V8 that roars through grass, dirt, and rocks with ease. 2.5-inch, external-reservoir TRD Bilstein shocks are top-of-the-line, and allow for boosted travel across all terrains.

The strength of the Toyota Tundra Double Cab TRD Pro really needs to be seen to be believed. 400 pounds of torque and over 380 horsepower make towing its capacity of 9000 pounds easier than could be imagined. And, with a payload capacity of 1,620 pounds, coupled with a deck rail system to keep cargo in check, drivers can rest easy no matter what they’re towing – or where. An expanded 38-gallon fuel tank allows for long trips anywhere one fancies. 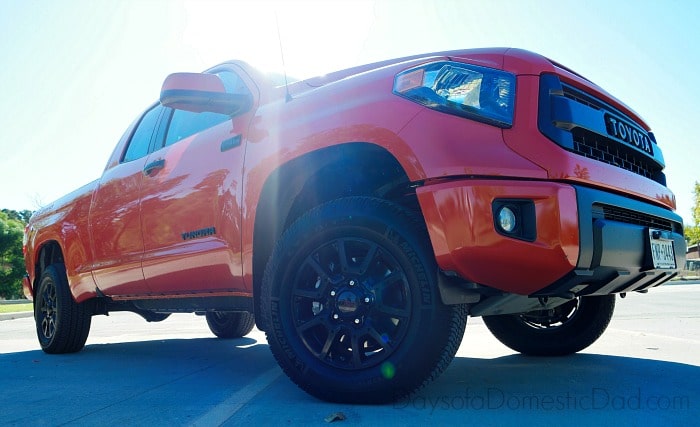 It would be easy for Toyota to stop there and call it a day, however, they’ve gone the extra mile in the interior as well. As the name implies, The Tundra’s double cab has four doors including its traditional rear doors and a gigantic CrewMax cab for added comfort. The black leather trim on the seats alongside the unique floor mats and shift knob make sitting behind the wheel of this truck almost as fun as actually driving it.

Finally, it would be unjust to neglect mentioning the car’s real value. Toyota vehicles are known for their resale value and easy modification. This gives buyers the option to trade it in for a great value in one, five, or ten years down the line. Alternatively, the truck can last even longer with regular maintenance, and be modified to one’s content. Toyota has also manufactured their Tacomas in America, and it shows. This is a car straight out of the American tradition, blending easy power with a sleek exterior and complete driveability.

One needs only to review the famous 2013 Superbowl commercial, in which a Tundra towed the Space Shuttle Endeavour across a bridge, to know what these trucks are all about. The Toyota Tundra Double Cab TRD Pro gives drivers access to an incredible amount of power – one they can easily harness for work, play, and anything in between.

I participated in an Influencer Activation on behalf of Influence Central for MyLocker. I received product samples to facilitate my review as well as a promotional item to thank me for my participation. The other day I was looking for…

All posts must include the following disclaimer: The reviewer has been compensated in the form of a Best Buy Gift Card and/or received the product/service at a reduced price or for free. As a family we are normally on the…

The reviewer has been compensated in the form of a Best Buy Gift Card and/or received the product/service at a reduced price or for free. I am super excited that I get to share with you what I have been…

Disclosure: I have been compensated in the form of a Best Buy Gift Card and/or received the product. The new 30″ Electric LG Combination Double Wall Oven is a testament to total efficiency. Cooking in this oven offers flexibility with…

The SunBrite Veranda series of TVs are weatherproof. They are designed and built specifically for the outdoors. These TVs are engineered for permanent outdoor installation in full shade. They are durable and safe to use on a terrace, patio, or…

Press Release:   Toyota Hello Texas Block Party We are so happy to see the Toyota Motor Company moving to North Texas! Staci and I have had such a long lasting relationship with Toyota and Lexus together. Toyota has always…