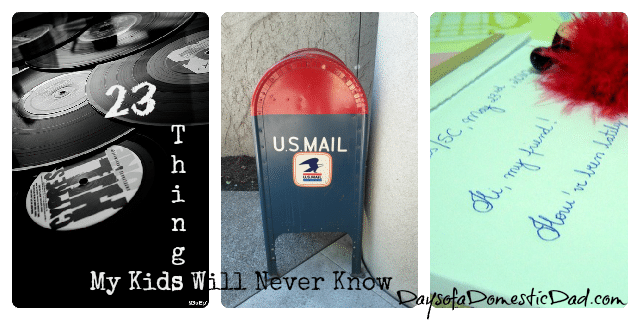 My Kids Will Never Know

Princess and I were headed to Happy Hour at Sonic today to get a half price drink and I was jamming out to some old 80’s jams. When we came to a stop, I turned down the radio and she asked me if I really like that kind of music. I was blaring The Vapors, Turning Japanese and remembering the first time I heard it. I was on the way to the Mockingbird Drive Inn in Dallas.  Before I replied I thought to myself, “Okay she is only 7, my kids will never know this type of music. She doesn’t know anything but Justin Bieber and the Disney Channel.” Princess, I like/love my rock/pop/funk music from the 80’s era like you adore Justin Bieber and everyone on the Disney channel. She kind of just sat there with a disgusted look on her face and asked if I could change the channel. Nope.

I started to think about my kids and what they may miss out on as they get older.

23 Things My Kids Will Never Know

It is weird to think that several of the things we once did in our childhood have now been modified or phased out over time. I can only hope that all of the changes we go through as we progress can only be good for us… ad our children.

Is there something you miss having or doing? Something your children will most likely never know as they grow?