This week’s Throwback Thursday is a tribute to an old hip-hugging classic: the beeper. Most professionals called it a pager since that is what its inventor, Al Gross, called it. The pager was originally intended for use in police departments and hospitals. As a refresher for those that remember them, the beeper would deliver a short message or phone number to the receiver. The one receiving the message would then know to call back the person or do another designated task. 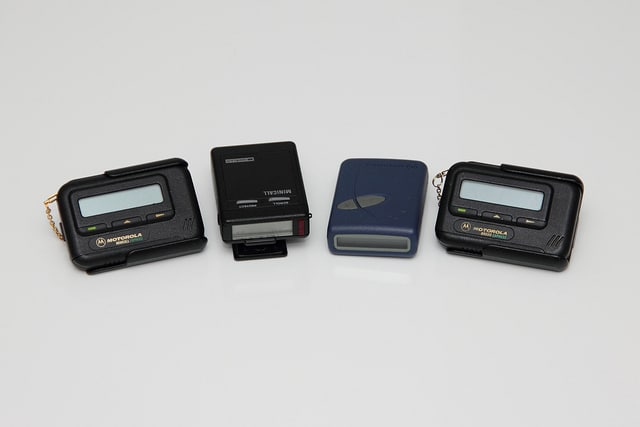 Did you know the beeper was developed and in use by 1949? And then, in 1959, a small company by the name of Motorola came into the picture.

Motorola made a personal radio communications product they called a pager at that time. The Motorola pager was a small receiver that delivered a radio message individually to those carrying the device. The first successful consumer pager was Motorola’s Pageboy I that was first introduced in 1974.

By 1980, there were roughly 3.2 million people using beepers. Even though at that time the service was limited to only a city or state. Over the next decade, the popularity of beepers grew and there were approximately 22 million beepers were in use. It was during the 90’s that the service area grew to include nationwide coverage… and people began using them for more a personal use. By 1994 there were over 61 million beepers in use and they became a must-have trend across the country. A beeper vibrating at your side meant you had it going on.

In fact, the trend grew to where mainstream artists such as Ice Cube, Method Man, and Sir-Mix-A-Lot began referencing the pager in their work. Sir-Mix-A-Lot even wrote a rap about his use of a “SkyPager” in his song entitled, “Beepers“:

Beepers in my day were the thing to have and if it was “blowing up” then something was going down. As the years progressed, beepers changed and gained options more options other than just a single line screen. Some beepers had a screen to offer 8 lines of text  and could hold 60 messages in storage. The fun of beepers came in trying to figure out how to send text through the use of letters.

With today’s cell phones, beepers are basically becoming an endangered species. Sales are down and fewer companies still even make pagers anymore. Even the older one-way pagers are now being replaced by more sophisticated messaging tools, such as two-way beepers and the ever popular cell phone. There are no number configurations to be deciphered… just plenty of fun with emoticons.

Did you have a beeper back in the day? What was your favorite word to spell with the numbers?