You Are Here: Days of a Domestic Dad » Sometimes Dads Give The Best Advice on Twitter
June 26, 2017

On Father’s Day, Jimmy Fallon asked the world to give their best #Dadvice and #DadQuotes on Twitter…and the world didn’t let us down. When Dad is normally giving us advice or sharing a personal quote, we can expect them to make some sort of “real world” sense., such as: “Change your oil every 30,000 miles” or “Be sure to carry a can of mace with you if you’re walking alone at night.” 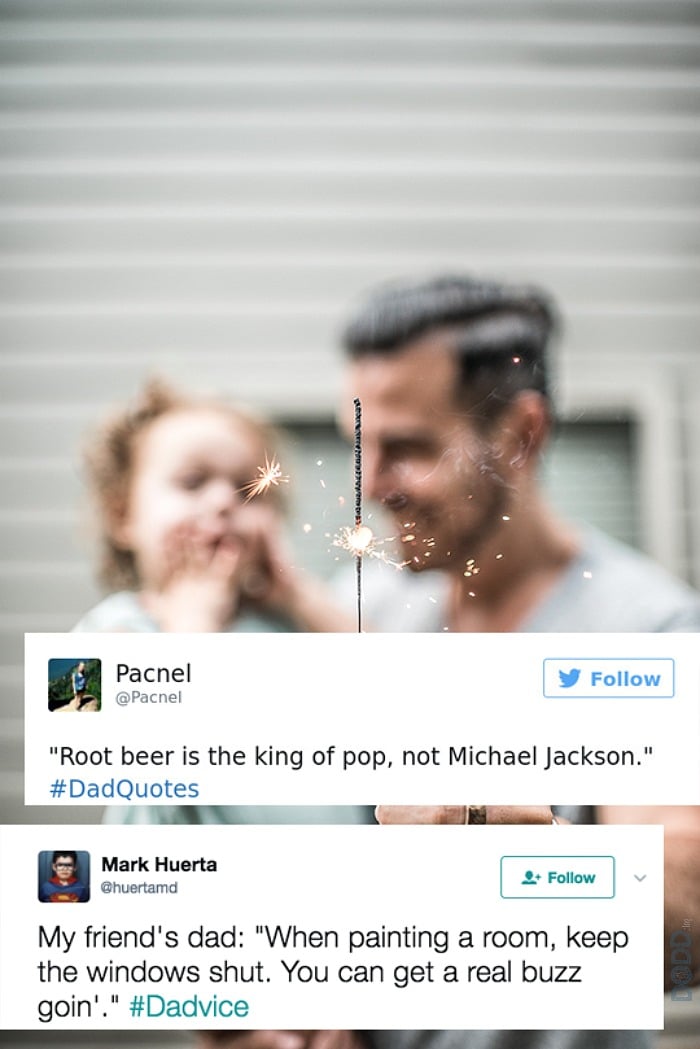 Not these Dads. These Dads have other amazing advice and quotes to share with their children, and I can’t stop laughing. My stomach literally hurts. Go ahead and read to see why!

“When you start a new job, don’t talk a lot. This way they won’t know how dumb you are.” I said,”Thanks, dad!” Guess he was right. #Dadvice

#2: Nobody wants to remember.

Once my dad came to my band show & didn’t take any pictures. I asked him why & he said “Nobody wants to remember this”. #DadQuotes

On my first driving lesson, we passed the cemetery and my dad said, “Buckle up – that’s where the bad drivers go.” #Dadvice @jimmyfallon

#4: Put one show in each suitcase.

“At the airport my dad said, “Put one shoe in each suitcase so if it gets stolen they can’t wear your shoes.” #Dadvice“

“What do you do when a stranger gives you drugs? Say ‘thank you’ because drugs are expensive.” #Dadvice @jimmyfallon

Hashtag game! Tweet out something weird, funny, or embarrassing your dad has said and tag it with #DadQuotes. Could be on the show!

Once my dad went to the grocery store n the cashier asked “if u want the milk in the bag” he said, “just leave it in the carton” #DadQuotes

Every time someone asks my dad “how are you?”, he ALWAYS responds with “the voices tell me I’m good today”. #DadQuotes

When I was younger I was playing softball and told my dad I was afraid to get hit. He responded with “it’s ok, we have insurance” #dadquotes

My dad told me he accidentally swallowed some scrabble pieces and he “wasn’t looking forward to his next vowel movement.” #DadQuotes

Hashtag game! Tweet out something weird, funny, or embarrassing your dad has said and tag it with #DadQuotes. Could be on the show!

When mom wouldn’t let dad build a maze of beer cans in our yard he said “You’re the cloak of darkness smothering my fire of fun.” #DadQuotes

Dad: School’s the least of your worries.
Me: What’s the most of my worries?
Dad: Existing. #ok #dadvice

Saturday Dadvice
My dad told me that if I ever wanted to nap during class
To make it look like I’m praying. pic.twitter.com/r5tINH5Ej8

Love is like a fart – if you have to force it, it’s probably crap. #dadvice

Just dropped Emily at 8th grade dance. Last thing I said was “if a boy tries to dance with you punch him in the throat” #dadvice

I asked my Dad how he always managed to make delicious popcorn.
He said, “that’s Pop’s secret”.#DadQuotes @FallonTonight

when i accidentally took out the tail light of a mercedes parked in front of me: “stop crying, pay him, and next time hit a ford” #dadvice

Told my dad I was going camping at a local state park for my 30th birthday, he proceeded to give me tips on how to sneak in alcohol #dadvice

My dad always said, “You better go to church every Sunday. We need somebody int this family to go to Heaven.” #Dadvice

I told my dad that he only makes dad jokes, and he said, “I’ve only made one joke in my life, and you’re it.” #DadQuotes

Friendly career advice from my father:

Never take a job where you can be replaced by a bucket of sand. #dadvice

“Yeah in the tribe we originated from, we were probably comedians, not hunters.” #dadvice

When walking through the incontinence section at the grocery store dad would say “why buy ‘depends’? I’d want the ‘for sures'” #DadQuotes

My dad once told me, “Don’t feel bad if you strike out. That just means we can get out of here sooner.” #Dadvice

When I was 13 I gave my dad a handmade Father’s Day card. He looked at it & asked: When r u going to start buying me a real card? #DadQuotes

#29: The tooth and nothing but the tooth.

@jimmyfallon My dad used to say be true to your teeth and they’ll never be false to you. #DadQuotes

@jimmyfallon My dad used to say be true to your teeth and they’ll never be false to you. #DadQuotes

Me: Dad can you make a sandwich?
(magician’s hand gesture)
Dad: POOF! You’re a sandwich#DadQuotes @FallonTonight

Watching “Chicken Run,” my dad suddenly exclaimed “yeah, right!All those chickens working together like that.” #DadQuotes

When I was little my dad would tell me to “Behave, or else Santa will come on Christmas Eve and burn our house to the ground.” #DadQuotes

“Root beer is the king of pop, not Michael Jackson.” #DadQuotes

My friend’s dad: “When painting a room, keep the windows shut. You can get a real buzz goin’.” #Dadvice

These are some of my favorites, but there are literally thousands upon thousands of tweets full of #Dadvice and #DadQuotes! What are some your favorite quotes and tid bits of advice from your Dad? Let me know me know in the comments or send me a tweet!

« This Summer, Stay Cool, Calm and Collected with these Quick Tips to Control Stress
Tip to Knocking Out Those Hard Water Deposits in Your Coffeemaker »