I normally don’t get overly excited about too many things, just fast cars, food, and Disney Channel programming. And, this month after the premiere of Descendants on July 31st a new show will arise. Sounds corny, sorry.

Cast of BUNK’D on Disney Channel

I am pretty excited about the continuation of Disney Channel’s show Jesse in the form of BUNK’D.

Emma, Ravi, and Zuri Ross head off to a rustic summer camp in Maine, where their parents met as teens. Along with their new friends, the trio tries their best to settle into their exciting new lives at Camp Kikiwaka.

During our visit to LA, we stopped by the set and were able to visit with the up and coming Disney Bunk’d cast.

Been to summer camp before?

Skai and Nathan – No

Nina – Science camp, a bunch of camps, but mostly science where they would sit and study poop on the ground when they came across it Looking forward to attending a summer camp after being on the show.

Nathan – I would never go to camp. I would miss everyone.

How much does real personality play into a character from Bunk’d?

Nina – character is an exaggerated version of myself

Nathan – we’re not really alike, he wants to read books and draw whereas Jorge wants to go to the lake and jump; character is messy, he is more neat and shy
watch tv differently?

Nathan – kinda weird thinking you are working with the people you see on tv; it’s awesome

Nina – sees them from a different point of view than before

After those awesome Camp Kikiwaka cast members, we sat and talked with the super talented Kevin Quinn (Xander) and Karan Brar (Ravi).

Have you gone camping?

Karan – in 5th grade, I went to camp for 3 days; fell in love with it; freezing cold (in Seattle where he grew up) but best experience; but this is a fake rendition of it but very fun

Kevin – it feels like a real camp here at camp Kikiwaka; went to camp for 3 years, 2 weeks at a time; Wisconsin; fun experience; taught him independence and how to be himself; it was important for him to get out and learn to be away from his parents

Karan – meet people from all kinds of areas and backgrounds; people on show are diverse so they are bringing together different cultures; they are from a penthouse in NYC; Lou is from a farm

Karan – I think my accent is terrible. I think I do it so badly. My parents are actually from India… but I am a first-generation American. Learned from an “Italian guy in Burbank.” Uses accent all the time. Kids freak out when they meet him and he doesn’t have the accent.

Finally, we spent the most time with the dynamic duo, Peyton List (Emma) and Miranda May (Lou) from the cast of BUNK’D.

Peyton – having so much fun, 5th episode; feel like we’ve already known each other for so long

Miranda – being in a different environment that hasn’t been seen before has been really fun for us;

Were you excited to continue role as Emma?

Peyton – it was choice; I was really excited to play the same character; she is not exactly the same; she has been humbled since arriving at camp Kikiwaka; excited to be able to play this new side of Emma; Lou has helped humble her

Miranda – I am more of the countryside and I have to bring the city girl down a few notches [Are you a country girl like your character?] Yes, I grew up in the country of Ohio, so to bring out that countryside of me has been so fun! I love all of that stuff; has a prize steer at home a that carries over into the show (named Stan);

Peyton – no but always wanted to go; have to complain about bugs and humidity but they’re not really experiencing it

Spend a lot of time together off the set?

Yes! have sleepovers at least once a week; didn’t know each other before the show; didn’t think they were going to be friends; actually born on the same day; we really clicked being part of the Disney Bunk’d cast.

Who is the Winter Soldier? Better yet, who is Sebastian Stan? At least that is what I asked myself a few weeks ago before screening Captain America: The Winter Soldier. I know if I was sort of a comic buff,…

Disclosure: I received an all expense paid trip to the Disney Planes premiere, as well as The Little Mermaid event, however all opinions are my own. There has been times in my life that I have been surrounded by people I… 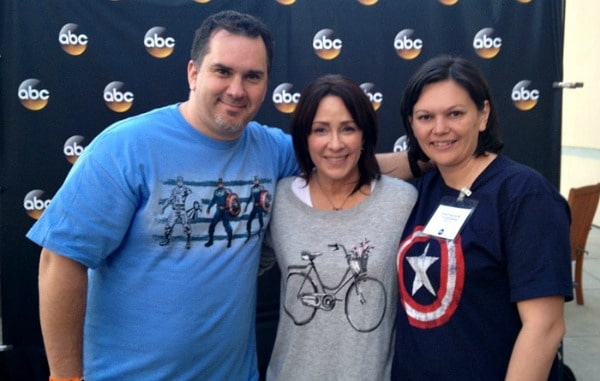 During our trip to LA, we hung out with the Moms of ABC at a little cocktail party atop a ABC building. I was exciting to be able to sit down and visit with some new and old celebrities from from…