You Are Here: Days of a Domestic Dad » What Does it Take to Make Zootopia
February 3, 2016

The Disney animation team has shown us wonderful worlds filled with fun and unlikely friendships between seemingly different characters. With great ensembles in movies like Cars, the Toy Story franchise, and Wall-E, Disney can make us empathize with characters we’d usually be unlikely to follow. This March 4th, Zootopia is set release as yet another ensemble movie about the world of Zootopia, where animals do the same jobs humans would in a futuristic world. 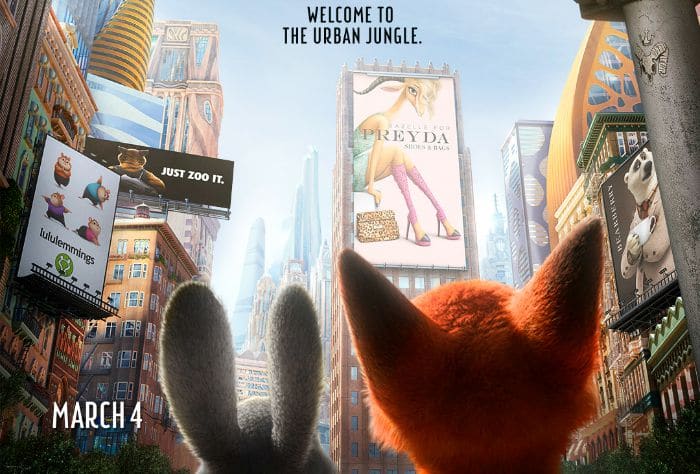 The Making of Zootopia

During our trip to LA a few months ago, at Walt Disney Animation Studios we sat down with the people that brought Zootopia to life. Writer and Co-Director Jared Bush, Writer Phil Johnston, Co-Head of Story Josie Trinidad and Head of Editorial Fabienne Rawley shared their day-to-day story safari. Jared Bush started off sharing that nearly 550 people worked on Zootopia since 2011. The process from creating/designing to finished scenes is an intense labor process. Write Phil Johnston, explained that it took months to research many types of animal species. Once a certain animal is perfected in animation, the team begins to inject it into scenes of the movie. Overall, with almost 1,770 drafts of Zootopia on computer you can say some scenes and characters are added or left out.

Zootopia had a team of 10-12 story artists, upwards to 30 at one time, to take the script to story board. Once the story board are ready they go to (Head of Editorial) Fabienne Rawley. At that point the story or scene is pitched to the team.

Majority rules to cut/keep a scene? Yes and no. Usually the story tells you. Characters and theme tell you what should and shouldn’t be in the movie. You want everyone to have an opinion but must be able to defend each scene. Most of the time, best idea wins. Can get heated but they go for what is best for movie. HUGE collaboration. You never know where an idea will come from. – Jared Bush

We also visited with Chad Sellers, Animation Supervisor, and he shared how far the Disney Animation team went to recreate animals. He shared, that has never had this much fun animating a movie. The characters, the designs, are fun and great to work with. He explain the team would go to local rescue facilities and as far as Kenya, Africa to study animals for the characters of Zootopia. The experience of seeing animal’s in their own space without restriction really changed what they were doing in the film. Chad said the trip to Kenya was inspiring; felt like what they were doing before that point was just touching the surface; wanted animals to feel like animals in nature even though they walk on two legs in Zootopia.

What was your favorite animal to research? Giraffes (interesting, surreal motion to their cadence; move fast but look slow), tries to feel things and not copy; elephants, passed by closely and their gentle aspect of the animal blew his mind; when he came back and looked at drawings, he felt a new perspective.

Most difficult animal to humanize? Sloth; all the principles of animation went out the window because everything had to be very slow; sequence they had to redo the most; so unnatural to them due to physicality, but was hard; not a lot of motion was challenging.

Get Social With Zootopia

« My Kids Put Persil ProClean 2in1 to the Test and They Lost
5 Ways to Have a Healthier, Happier Family »