For the second time this week, my little princess has sparked an intense conversation amongst the family. She normally does simply due to the fact that she is very random in what she says.  Granted, they are usually pretty good conversations.  This spontaneous 7-year-old can be talking about the same thing as the rest of the family and bust out with something completely random and off-the wall: “I have two boyfriends” or “when I grow up I am going to sleep all day and party all night“. Where does she get this stuff?

Well, this evening we were on our way to our favorite Italian restaurant to meet Dot Dot (my Mother-in-Law) for dinner. On the short ride there, Princess asked her brother “Jake, what does intense mean?’ Jake hesitated as he thought for the correct answer and then tried to explain, “Well, I think it is like action packed or suspenseful.”

Princess was thinking about what her brother said and trying to digest the meaning. Jake then said. “It would be easier for me to explain the opposite of intense which would be dull, boring, or uninteresting”. After saying all that Jake asked, “Why, why do you ask”? She replied, “Well, because my friends and I were talking about the new Wizard of OZ movie”. Jake corrected her, “You mean Oz The Great and Powerful”“. She then said, “Yeah, the boys at school keep saying it is going to be an intense movie and they want to take me to see it.”

Oz the Great and Powerful

I asked Princess later if she would like to go see OZ The Great and Powerful when it came out in theaters. She only wondered if it was like the original Wizard of Oz and I explained that it was about Oscar “Oz” Diggs. Plus, I assured her that I had heard it was family friendly and not too scary for her to watch. She agreed that she did indeed want to see it, 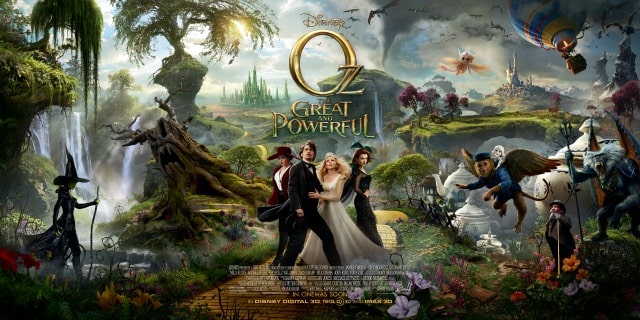 Disney’s fantastical adventure “Oz The Great and Powerful,” directed by Sam Raimi, imagines the origins of L. Frank Baum’s beloved character, the Wizard of Oz. When Oscar Diggs (James Franco), a small-time circus magician with dubious ethics, is hurled away from dusty Kansas to the vibrant Land of Oz, he thinks he’s hit the jackpot—fame and fortune are his for the taking—that is until he meets three witches, Theodora (Mila Kunis), Evanora (Rachel Weisz) and Glinda (Michelle Williams), who are not convinced he is the great wizard everyone’s been expecting. Reluctantly drawn into the epic problems facing the Land of Oz and its inhabitants, Oscar must find out who is good and who is evil before it is too late. Putting his magical arts to use through illusion, ingenuity—and even a bit of wizardry—Oscar transforms himself not only into the great and powerful Wizard of Oz but into a better man as well.

Disney’s Oz The Great and Powerful opens in theaters March 8th 2013 and is rated PG Family/Fantasy.

Want to find out more about Oz The Great and Powerful? Visit the interactive website for games and more. Plus, you can also follow along via Facebook and Twitter to keep up with what is happening with the movie.