You Are Here: Days of a Domestic Dad » LG ProBake Double Oven Could be the New Statement Piece in Your Kitchen
October 17, 2016

Disclaimer: The reviewer has been compensated in the form of a Best Buy Gift Card and/or received the product/service at a reduced price or for free

Product manufacturers are adding bits and pieces of new technology to their ovens all the time but it has been quite a while since there have been such fundamental changes made until LG introduced its all new ProBake System. The ProBake range features a heating element on the back wall of the oven which provides more even heating and speeds up both multi-rack baking, preheating and roasting. In addition, it is a massive improvement on almost every other kind of oven on the market. Another item it helps is improved cleaning. When Lgs new ovens are on their Easy Clean Express mode the additional back element allows the oven to be totally clean 10 minutes twice as fast as the original. 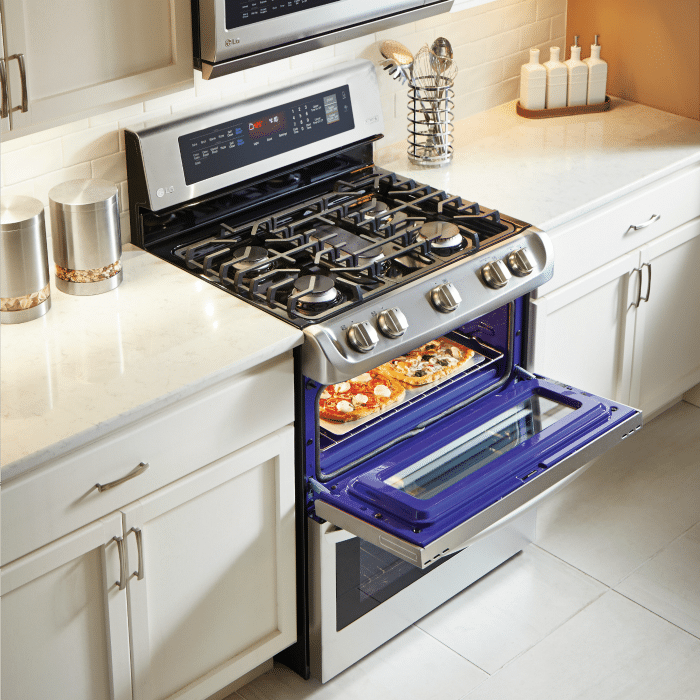 This is quite an innovation for LG because for almost a century all gas and electric stoves have had their heating elements only at the bottom of their ovens. LG’s new ProBake ranges, however, moved the heat source to the back combining it with a fan for optimal airflow. They have also done this with their gas ovens which were an engineering feat since of a gas range the element burns continuously. This element works alongside a fan to circulate heat evenly throughout the oven. This continuous circulation of convection heating even when the setting is in the off position is what improves the temperature regulation in all of LG’s new ovens.
While there are similar technologies available in ovens that you will find in a commercial kitchen, the only other residential oven that uses this configuration comes from BlueStar, whose PowR Oven, although similar, is several thousands of dollars more in cost.

In addition LGs exclusive convection system distributes air more evenly throughout the oven resulting in faster preheating and more uniform cooking. And with settings like Convection Bake, Roast, Crisp, and Healthier Roast, you can customize the way you cook.